You know those tiny and often useless flash units built into many smaller cameras or that pop out of the top of many DSLRs? The ones that many people totally avoid using because they seem to hurt more than help? The X100 has one of those. Here’s the thing though: I actually find it useful.

Sometimes you’re dealing with pretty crummy lighting and you need a small amount of fill, a kiss of light to hit your subject to keep them from being all shadowed up. Muah:

A few more examples of how well the fill flash works on this camera.

In these three image there was so much harsh sunlight (the sun was directly above us at this particular time of the day) that a straight shot without flash would have looked terrible. So I had my subjects look down, essentially shadowing their faces, and I popped some on camera light at them. Worked great for preserving detail in the background without completely silhouetting my subjects.

There is one problem you can run into however. You can see it in the image of the wifie above: Notice how her eyes and nose are lit by the flash, but there seems to be a loss of light from her nose down? That’s the accessory hood getting in the way:

I kind of light the spot light sort of look it gave to the image, but in most cases you’ll want to remove the X100’s lens hood (if you have one) before you use the flash.

I wrote a post a while back that covered the X100’s ability to sync with my SB-900 flashgun at crazy high shutter speeds. That high speed sync helps the camera’s tiny, relatively low-powered built-in flash as well, allowing you to shoot wide open and still light a heavily backlit subject with it, as seen in the example above.

Don’t get me wrong, I certainly don’t go out of my way to use that tiny little on-camera flash. Sometimes however, using it becomes the difference between getting a shot and not getting a shot. In that sort of situation, I’m pretty surprised at how easy it is to get natural results with the built-in flash. Low light portraits are a good example (above).

Ever use flash to take someone’s photo in a dark room or outside at night and get a super bright or even blown-out subject with a black hole for a background? Yuck. You can usually compensate by manually using a slower shutter speed to burn in some ambient while you mix your flash in to get a better image, or in the X100’s case, just turn the flash on and shoot.  Both of the low light shots above were taken in Aperture Priority Auto. All I did was turn the flash on and the camera did the rest, properly exposing my subject and balancing in the ambient (whatever little amount of ambient there was anyway).

Of course, human beings are not the only subjects the little flash can help you out with:

A little on-axis fill to lessen the harsh shadows on Bo Bear here. Also comes in handy for bringing a little more detail out of heavily shadowed areas of your frame. Check out the difference in detail, especially inside the shadowed area of the gas pump on the right, between the first image shot without flash, and the second with flash activated:

I like that the results are subtle. They don’t scream “taken with flash!!!!” 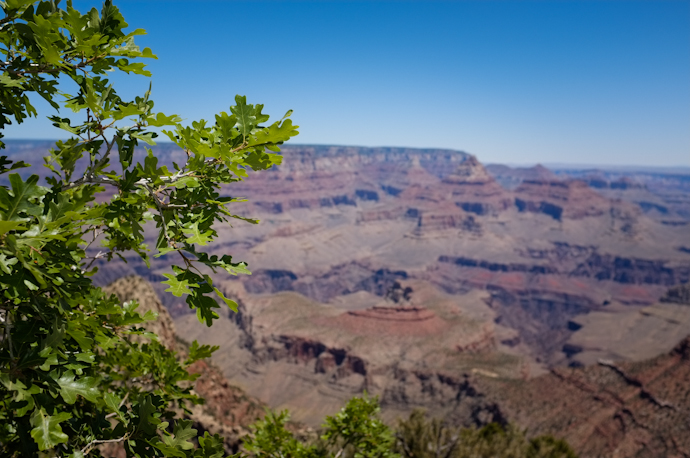 These leaves were pretty heavily shadowed. Use the flash to lighten them up against the background.

I must say, when I first saw the little built-in flash on the X100 I just chuckled. But hey, it comes in handy. Fuji calls it an “intelligent flash.” Seems like an appropriate name considering how easy it is to get natural results with it.  Good job, Fuji!